One of my Christmas gifts, both from others and myself, was equipment for a quadcopter. I ended up choosing the popular Flamewheel F450 kit from DJI, mostly because their parts are available locally and I anticipated (correctly, it turns out) a few crashes as I was learning to fly something bigger than my Crazyflie. In the end, the complete list of things I needed to get flying:

The kit was easy to put together but still took me about a day to finish. The main time sink turned out to be changing over the battery connectors - my little soldering iron struggled a fair bit with the huge 12- and 10-gauge discharge leads. I was really happy with the final result and with the help of a video, setting up the flight controller was super-easy. 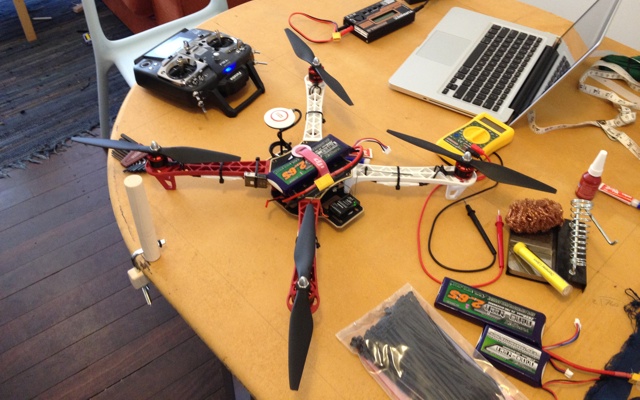 After a successful maiden flight, I borrowed an old GoPro HD and tried filming from the air. This worked pretty well apart from a bit of vibration in the videos which turned out to be because I hadn't tightened the prop nuts sufficiently. This came to light when one of the props came off 20 m above an oval and it took another similar crash for me to hit on the obvious solution: nylon locking nuts. The nyloc nuts have been great and the damage from both crashes (a crack in the bottom plate and broken prop) was easily fixed.

My next move was to add some navigation lights in the form of white and red LED strips. These are all wired in a continuous strip and can be switched on and off from the transmitter with a PicoSwitch attached to channel eight of the receiver. 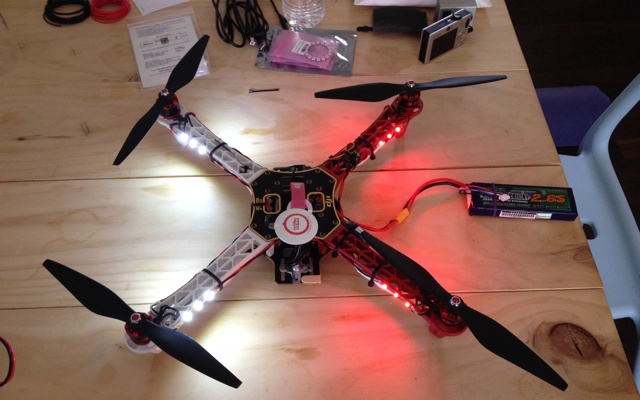 I was originally planning to get a new-model GoPro for recording video but after some research found the Mobius ActionCam. It's made by the same people that make the common 808 keychain cameras and has become popular with RC flyers due to its balance of cost (US$70 shipped), weight (40 g) and quality. I did have the Mobius mounted under the base plate using these 3D-printed leg extensions, but I'll need to reprint them and pay a bit more attention to the amount and pattern of the fill as a couple of hard landings this morning caused them all to break in the same place. The pictures below are taken from some videos I've recorded - click through for full-size versions. 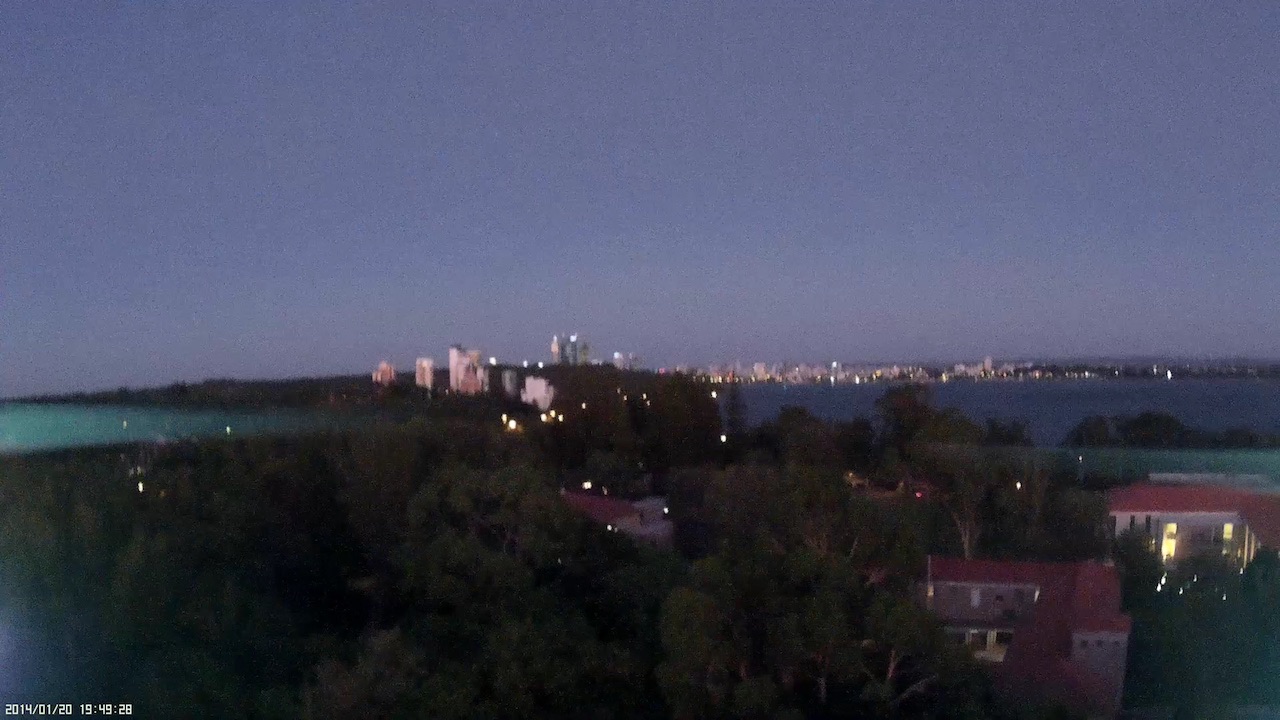 This was taken during a twilight flight while I was still testing the camera and attaching it to the battery with an elastic band. The automatic white balance had a fair bit of issue with the contrast between the dark ground and sky, though the camera can be configured with a fixed white balance setting which should improve it. 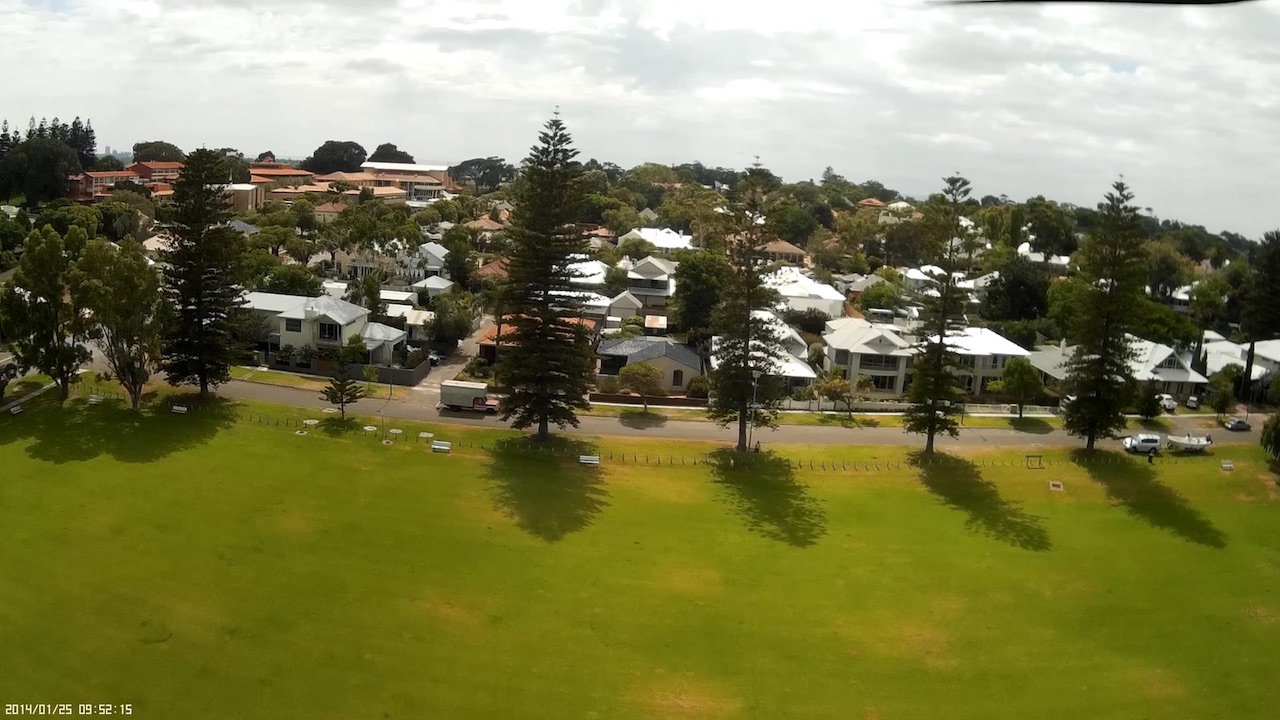 Mounting underneath with Velcro means the props aren't right in the centre of the frame. There's a bit of vibration apparent in the video, but hopefully I can fix this by balancing the props and adding a bit more cushioning.

One thing I added to my setup was the ability to activate the flight controller's failsafe using one of the transmitter switches rather than having to switch off the transmitter. While there were a couple of videos on setting this up, all of them seemed to only work if the flight mode switch was in a specific location - not ideal for an emergency situation. To get around this, I used an offset mix on the flight mode channel (channel seven in my case) which shifted that channel by 50 units when triggered. Checking this with the DJI software indicated that it worked regardless of flight mode, and a field test was also successful. If you're looking for something similar, the steps I used were: